Small Things You Can Do To Keep the Nature Clean


Last weekend: short escape in the Bucegi Mountains with my girlfriend, Alina.


Unfortunately, the closer we got to easily accessible places of interest, like the "Babele" chalet, we were stroke by the increasing number of beer cans and plastic bottles that were thrown away in the field.

Many people think that either a solution cannot be found to having tourists not throwing garbage in the fields or that it is not their responsibility to find a one. I don't think so.

Probably most people believe that it lies with someone else, like with authorities that should increase penalties for garbage disposal in non-specifically arranged locations, have enough law enforcement officers in the field to apply the law, install trash bins in these areas and collect the garbage frequently. NGOs. Students. Army. Somebody else. And up to a point they are right: authorities should maintain public spaces clean, as we pay them to do so and it lies within their area of responsibility. 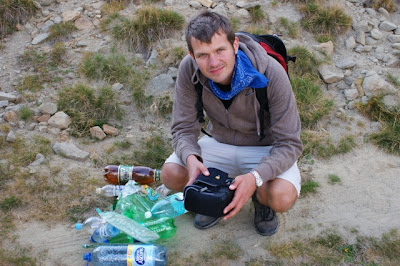 Plastic bottles gathered from the fields, near the "Piatra Arsa" chalet (round 2) - unfortunately we couldn't carry more with our bare hands

I believe that many people are reluctant to act because they don't trust that their effort has an effect on the long term. But it does and it extends beyond their mere action. I believe that cleaning up the environment is contagious and invites others to follow. It passes the message further. It creates waves. It creates a trend. An individual, by himself, does not have enough power to clean up the whole planet. But he can empower the people around him to do so by his personal example. If 10 people watch and follow him in the course of his life, and if another 10 people follow each of the 10 people, we have already 111 people cleaning up our fields, our neighborhoods, our streets. And it grows exponentially. And where it is clean and tidy, it is less likely for others to throw trash back in.

Yes, I believe that it lies within our power to act locally. It is scary at first but after that it feels great. Don't wait for the weekend. Tomorrow, when you see a plastic bottle on your way to work, pick it up! You do it in your living room, right? Why not extend to your street, your nearby park, our forests?

Posted by Alexandru Gris at 8:47 PM