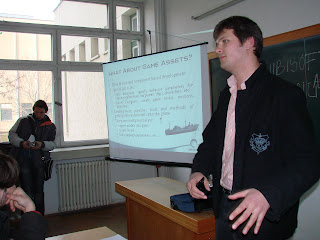 Last week BEST (Boart Of European Students Of Technology) had a festival in Iasi. Ubisoft was invited to present itself and to sustain a contest of game development. Both the contest and the presentation were a success. To my surprise though, many students were not aware before the presentation that those cool games outhere are, in part, developed in Romania. Yes, they are and the Bucharest Studio has a strong position within the Ubisoft group. Brands fully developed in Bucharest:
Also the Bucharest studio took part in developing other well known games, in collaboration with studios from abroad. Yes, a career in game development is possible in Romania and yes, you get to work at the highest level.

The picture represents me, sustaining the presentation.
Posted by Alexandru Gris at 2:04 PM

Email ThisBlogThis!Share to TwitterShare to FacebookShare to Pinterest
Labels: Ubisoft

It's very true that many of the students don't know about local game development, actually, there is little or no information going around about the local studios. The main thing you can hear a lot about is web design and that it's not really that interesting. I went to the presentation not expecting very much (the usual ruttiness: 1-2 hours of nothing, the "we are uber cool speech" and maybe a little gift of some sort), but then the case study the next day was awesome, even with almost no knowledge about C++, I managed to take the first place (I really think it was just because I didn't try just "a ball game" and I was a little bit familiar with the math :D, the coding itself sucked big time). Anyway the hole thing made a difference for me, I'm in the final year, planning to move next year to Bucharest, I really love games and actually developing them and now I'm trying to find some good literature about the subject and trying to get up there in the big boys league.

I'm really glad you found the presentation useful.If I can be of further assistance, please let me know. :) Good luck!