Not Employees But Strategic Partners 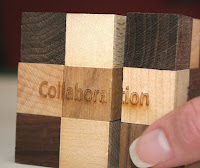 One of the duties of a manager is to create a sense of urgency within the team. This is not without a purpose as delivering sooner means not only cheaper but also hitting a market window opportunity, enhanced creativity due to constraints, sense of completion and a lot more. However, creating such a state is very difficult as many managers (including myself) are not always able to come to their team with a solid answer to "why do we need to rush?" question. Most of the time, we mumble something like our boss told us so and we have to obey him. Quite lame, isn't it? There is, however, a powerful tool and a good reason behind the tight deadlines except costs - that is, the company strategy. Often neglected because managers think their employees are not interested, the long term strategy and the overall company vision give the answer to many questions concerning the project and its constraints. Communicating the strategy in a way that is understood by people will turn them into strategic partners rather than simple employees - a part of something bigger, something that makes sense and has a reason. They will better understand what is expected of them as they will see their place in the bigger picture. They will also grasp what is coming up next and also increase their loyalty because they have something to be loyal to. Every human being wants to catch a small glimpse of his future and if managers are capable unveiling the bigger plan (strategy) it will provide at least a partial answer to this natural human need. People who understand their role are much likely to give you trust and have the tendency to rally toward a common goal even if the future is cloudy. So tell your teams about the company strategy and you should be able to see miraculous results.
Posted by Alexandru Gris at 4:51 PM

Email ThisBlogThis!Share to TwitterShare to FacebookShare to Pinterest
Labels: thoughts